Shopping Basket
Your Basket is Empty
Quantity:
Subtotal
Taxes
Delivery
Total
There was an error with PayPalClick here to try again

Thank you for your business!You should receive an order confirmation from Paypal shortly.Exit Shopping Basket

Getting Back to the Blog

Well, got home today with Larry greeting me on theporch;  “the leather chair prolapsed but I stuffed everything back in.”  The green leather armchair, some 18 years old, with lots of previous dog abuse in termsof climbing and sleeping, had given up the ghost yesterday with a small rip inthe arm.  Today, they discovered it.  In addition, the very small remains of cash lay in the middle of the kitchen floor.  I confirmed it was just a one, I could still read the “on” on the Washingtonrunning underneath the portrait, but it could just as easily have been a $10 ora $20, or on occasion, a $100. (Larry loves pocketing cash out of the dryer,sometimes his scouting is quite lucrative.) Reminded me that “Bad Dogs” arestill bad, and I haven’t updated the farm blog in almost a year. 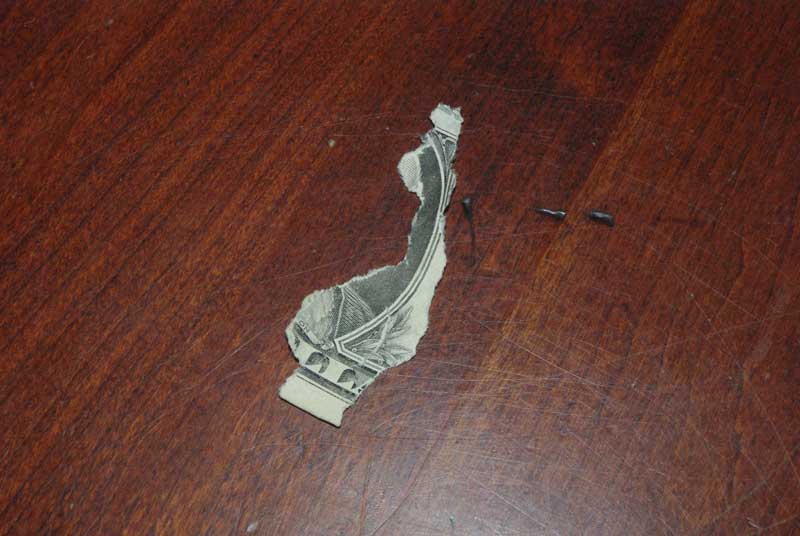 We have had a busy fall: a couple of out of state deliveries in October, just before heading to Hawaii for a couple of weeks.  Mid October found us hauling a load of cattle to Alabama just east of the Talladega Mountains in what I would have to call the foothills. Neither one of us ever realized that Alabama had mountains, but this is where either the Appalachians begin or end.  Gorgeous country, with only one drawback that we could see. (Explanation coming.)

We drove to just south of the Tennessee border and found a hotel.  Fed and watered the cattle on the trailer and at the time were very grateful for the lovely light rainfall that night.  We had chosen mid October for delivery so that we could avoid the heat;  but the temperature went up close to 80 degrees until the sun went down.  The trailer was full, with 4 big 2 year olds in the back compartment, and 2 more bred 2year olds and a 2 year old bull in the front compartment.  They had room to stand up, lay down and turnaround, but that was about it.  So,anyway, the rain cooled things off quite nicely.  We took off about 6:30 the next morning figuring about a 3-4 hour trip.  Again, the morning was cool and comfortablefor the cattle.  After crossing the Talladega Mountains, we wound our way into Ashland.  The cattle were headed out to an 80 acre pasture with a small holding pen built on the far side to acclimate them for a few days.  To get to their pasture we needed to cross the neighbors land, literally right through another pasture ofcattle.  There was one tricky spot with a narrow culvert and an immediate slight turn once it was crossed.  Sure enough, the trailer tires slid off theculvert, but Larry floored it and the Chevy just pulled it right up over theculvert.  Next was a very, very steep hill;careful on-foot investigation showed it to be solid gravel and rock and again,despite the heavy load, the Chevy walked right up it.  We figured we were now home free.  Wrong. A half inch of rain on Alabamared clay (drawback revealed) is not a good thing,  Going around one last corner through a cut inthe hill and the entire pickup started to slide.  Fortunately, once the bottom of the trailer hit the dirt,(as the right side of the trailer is hanging over the edge of thehill) we stopped sliding, but there was no pulling the trailer back on the dirttrack until it was empty. 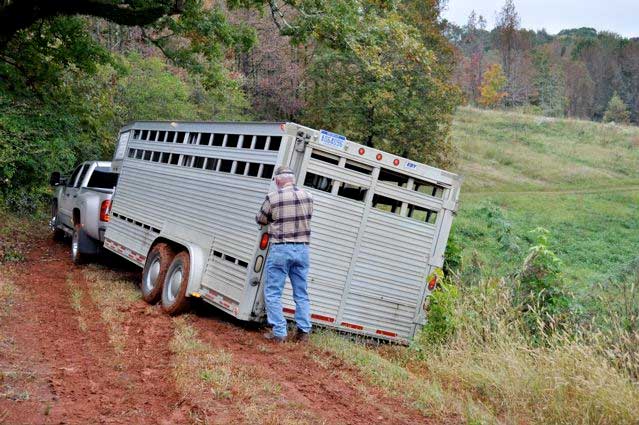 The cattle were not haltered, nor to be perfectly honest, would they have been in the mood to walk placidly another ¼ mile for us even if they had been, but we were inside their pasture.  SO, unloaded theywere.  Although the pictures don’t make it look as tilted as the trailer really was, every one of those cows actually slid and fell getting out.  There was plenty of bedding, so nobody got hurt, but they literally all went down on their side once they tried to move. 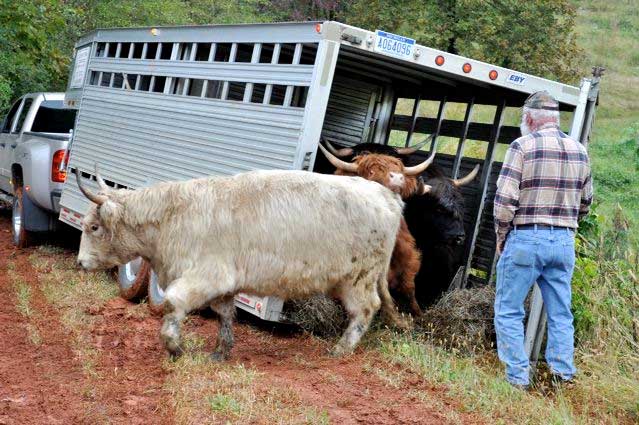 Despite that, they all shook themselves off and went on a walkabout to investigate their new surroundings.  New surroundings, as it turns out, that are absolutely gorgeous. 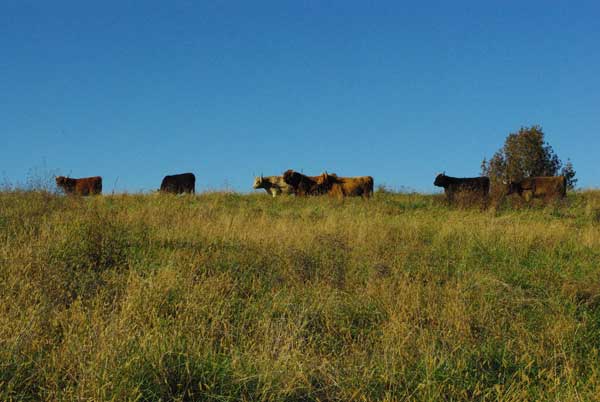 Thank you Eleanor, for the photos.